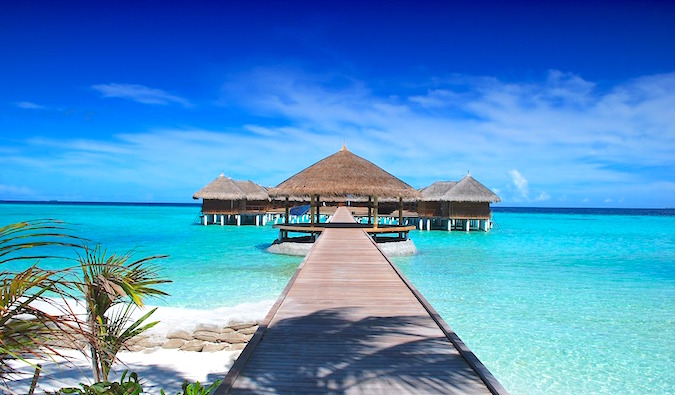 Full Board All Inclusive Meal Plan

Unlimited Drinks: All drinks are served in glass.
Non-alcoholic drinks, soft drinks, fruit juices, American coffee, tea, alcoholic spirits, draught beer, white wine are included.
Drinks in cans, bottles, other type of hot/cold drinks and/or all drinks served are not included in the all inclusive concept and are served to the guests upon supplement.

For Honeymooner:Freebies: Bed Decoration & Fruit Basket once Per Stay

Condition: Wedding Certificate should not be older then 6 months and should be provided at the time of booking / check in

For Honeymoon Couples : Freebies: A Beach dinner (subject to weather conditions only), A honeymoon cocktail and bed decoration

Condition: Wedding Certificate should not be older than 12 months and should be provided at the time of booking / check in.

Maldives officially the Republic of Maldives, is a small archipelagic state in South Asia, situated in the Arabian Sea of the Indian Ocean. It lies southwest of Sri Lanka and India, about 700 kilometres (430 mi) from the Asian continent's mainland. The chain of 26 atolls stretches from Ihavandhippolhu Atoll in the north to Addu Atoll in the south (across the Equator). Comprising a territory spanning roughly 298 square kilometres (115 sq mi), Maldives is one of the world's most geographically dispersed sovereign states as well as the smallest Asian country by land area and population, with around 515,696 inhabitants. Malé is the capital and the most populated city, traditionally called the "King's Island" where the ancient royal dynasties ruled for its central location.[12]

The Maldivian Archipelago is located on the Chagos-Laccadive Ridge, a vast submarine mountain range in the Indian Ocean; this also forms a terrestrial ecoregion, together with the Chagos Archipelago and Lakshadweep.[13] With an average ground-level elevation of 1.5 metres (4 ft 11 in) above sea level,[14] it is the world's lowest-lying country, with even its highest natural point being one of the lowest in the world, at 5.1 metres (17 ft).[14]

In the 12th century Islam reached the Maldivian Archipelago, which was consolidated as a sultanate, developing strong commercial and cultural ties with Asia and Africa. From the mid-16th-century the region came under the increasing influence of European colonial powers, with Maldives becoming a British protectorate in 1887. Independence from the United Kingdom came in 1965, and a presidential republic was established in 1968 with an elected People's Majlis. The ensuing decades have seen political instability, efforts at democratic reform,[15] and environmental challenges posed by climate change.[16]

Maldives became a founding member of the South Asian Association for Regional Cooperation (SAARC). It is also a member of the United Nations, the Commonwealth of Nations, the Organisation of Islamic Cooperation, and the Non-Aligned Movement. The World Bank classifies the Maldives as having an upper-middle income economy.[17] Fishing has historically been the dominant economic activity, and remains the largest sector by far, followed by the rapidly growing tourism industry. Maldives rate "high" on the Human Development Index,[11] with per-capita income significantly higher than other SAARC nations.[18]

Maldives was a member of the Commonwealth from July 1982 until withdrawing from the organisation in October 2016 in protest at allegations by the other nations of its human rights abuses and failing democracy. The Maldives rejoined the Commonwealth on 1 February 2020 after showing evidence of functioning democratic processes and popular support.