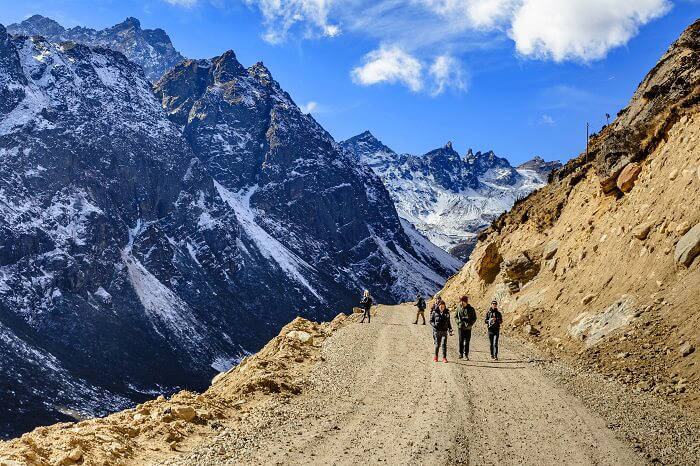 Day 1 - Arrival and Transfer to Gangtok : Our representative will be there to receive You at New Jalpaiguri Railway Station (NJP) / Bagdogra Airport (IXB) / Tenzing Norgay Bus Stand (Junction) – You will be assisted for the transfer to Gangtok – Gangtok the capital of Sikkim suits all from tranquility to adventure, land of monastery, mystic rituals & festivals-height of 5480 ft, it is the most visited- Nearly 120 kms 4 hours drive – Check into hotel - Overnight stay at Gangtok.

Day 2 - Excursion to Tsomgo Lake & Baba Mandir (Full Day) : Morning breakfast at hotel – Excursion to Tsomgo Lake & Baba Mandir nearly 40 kms and 2 hours drive -Situated at an elevation of 3753 m / 12310 ft - The Lake is oval shaped lake nearly 50 ft deep generally covered in snow for most of the year – home to the Brahmini ducks & many migratory birds – Nearby is the sacred Baba Mandir known to be a very holy site for all - Transfer to Gangtok  for overnight stay.

Day 3 - Transfer to Lachen from Gangtok : Early morning breakfast – Drive 135 kilometers, 5 – 6 hours drive - Chungthang is 96 kilometers from Gangtok – Lunch at Chungthang – Lachen is 35 kilometers from Chungthang Reach Lachen late afternoon / early evening - The snow capped peaks, the Shingbha wildlife sanctuary, Gurudongmar Lake, Chopta Valley, Thangu are the major attraction – It’s a valley surrounded by gigantic and humbling snow peak mountains and the starting point of Green Lake Trek – In fact the village cradled between stern, tall rock faces standing like guards – A hamlet with very few people – It almost like this town is hidden from the outside –Like a Shangri-Check into a hotel-Welcome Tea–Evening free to stroll and visit the Lepcha Village – Overnight stay at Hotel.

Day 4 - Excursion to Gurudongmar Lake and Transfer to Lachung : Early morning breakfast – Visit to Gurudongmar Lake 55 kilometers, 3 hours drive - A valley at an altitude of 11, 800 feet through which Lachen Chu flows, generally covered with snow from December to April or even more is known as the Holy / Sacred Lake - Next drive through the cold desert till Tibet / China back to Resort for Lunch – After lunch drive to Lachung - The region is fully covered with Rhododendron forest with Chopta Valley and Thangu are the other places of interest - Back to hotel for lunch - After lunch proceed to Lachung – Nearly 50 kilometers and two hour drive – Check into hotel at Lachung - Evening free to visit Lachung Monastery - Overnight stay at Hotel at Lachung.

Day 5 - Sight Seeing at Yumthang & Transfer to Gangtok : After breakfast drive towards Yumthang situated at an elevation of nearly 11800 feet - On the way you may visit the famous hot spring which is known for its curative properties of skin diseases - Yumthang is a valley near the river Lachung Chu surrounded by mountains where the tree line ends - In spring the valley erupts in riots of colors as Primulae, Rhododendrons and many other Alpine flowers in full bloom along with snow covered valley except in autumn - During winter Yumthang is somber with snow all around and the snow clad mountains adding to the ethereal beauty - Return to resort at Lachung for Lunch – Transfer to Gangtok – Reach Gangtok in the evening – Check into hotel – Night stay at Gangtok.

Day 7 - Sight Seeing at Pelling (Full Day) : Morning breakfast - Places of visit are Rimbi waterfalls, Rimbi Rock Garden, Kechopalri Lake, it is one of the holy Buddhist lake and it is believed that any wish in front of the lake comes true - Myth is that when a leaf falls on the placid clear water surface, it is picked by a bird and thus the water surface is always free of leaves, Kechopalri Monastery, Kanchenjunga water Falls, New Helipad, Rabdense Ruins & Kanchenjunga View tower etc – Back to hotel – Evening free to roam around the helipad or Shopping center - Overnight stay at Pelling