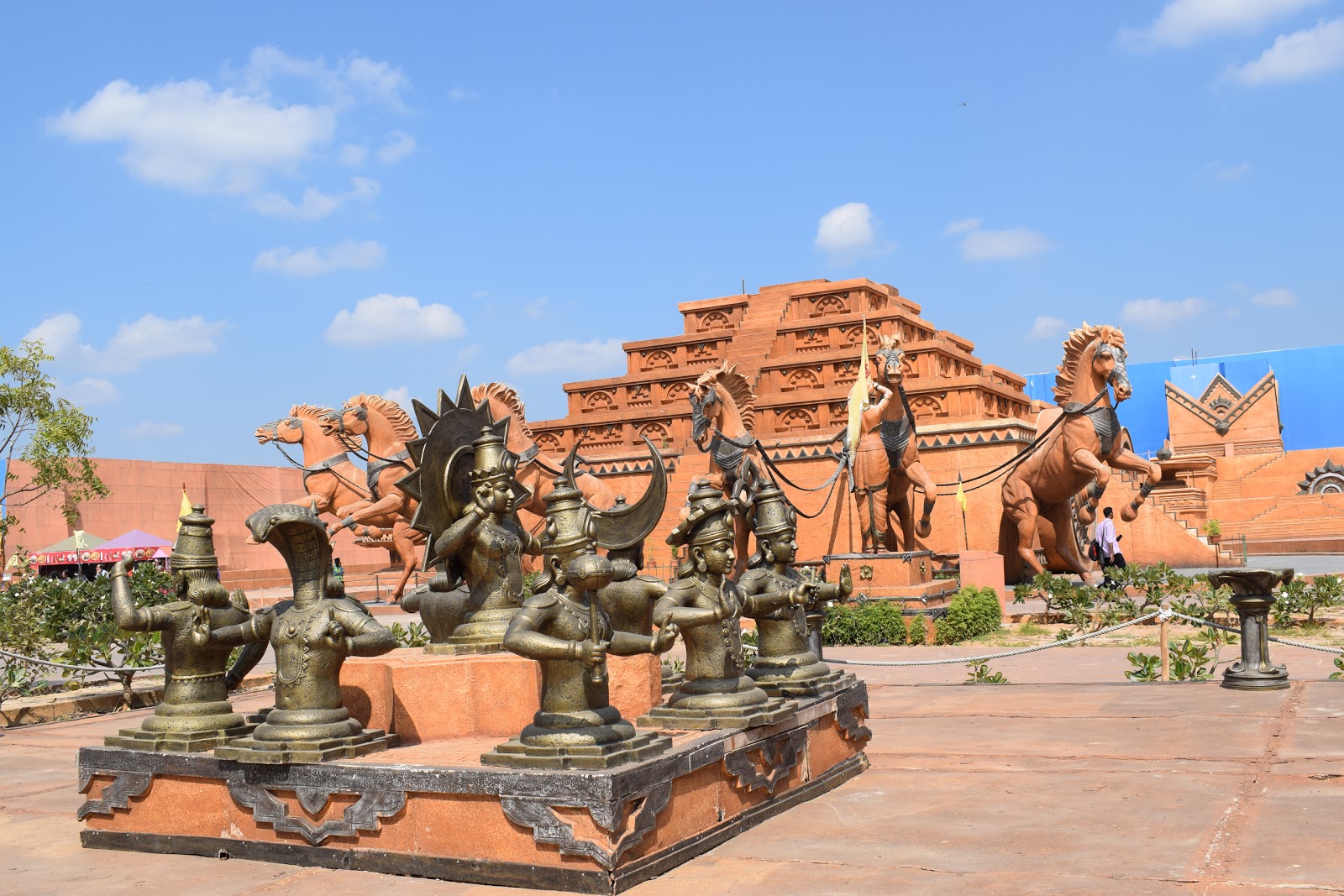 Day 01: Pick up from Hyderabad Airport / Station & transfer to hotel. Afternoon will be free for shopping. Overnight at Hotel.

Day 02: Breakfast at hotel then you will proceed for the city tour of Hyderabad. Here you will be able to experience the old and new city of Hyderabad. Through this city tour you will visit Snow World, Salarjung Museum, Charminar, Makkah Masjid, Chowmohalla Palace, Taj Falaknuma Palace and NTR Gardens, Boating on Hussain Sagar, in the evening enjoy the best laser show of the country at Lumbini Park, evening tea at Eat Street on Necklace Road on the banks of Hussain Sagar. Overnight at Hotel.

Day 03: After breakfast at hotel, proceed to Ramoji Film City Tour which is the world's largest film studio complex. This place you will enjoy both natural and artificial attractions including an amusement park. In the evening return to hotel. Overnight at Hotel.

Day 04: After breakfast at hotel check out from the hotel & if time permits proceed to Shilparamam, Inorbit Mall, GVK Mall, City Centre for shopping. Evening transfer to Airport / Station for your onward journey.

Hyderabad (/ˈhaɪdərəbɑːd/ (About this soundlisten) HY-dər-ə-baad) is the capital and largest city of the Indian state of Telangana and de jure capital of Andhra Pradesh.[A] Occupying 650 square kilometres (250 sq mi) along the banks of the Musi River, located on the Deccan Plateau in the northern part of South India.

According to John Everett-Heath, the author of Oxford Concise Dictionary of World Place Names, Hyderabad means "Haydar's city" or "lion city", from haydar (lion) and ābād (city), and was named to honour the Caliph Ali Ibn Abi Talib, who was also known as Haydar because of his lion-like valour in battles. Andrew Petersen, a scholar of Islamic architecture, says the city was originally called Baghnagar (city of gardens).One popular theory suggests that the founder of the city, Muhammad Quli Qutb Shah of the Golconda Sultanate, named it after Bhagmati, a local nautch (dancing) girl with whom he had fallen in love. She converted to Islam and adopted the title Hyder Mahal. The city was named as Hyderabad in her honour.

According to German traveller Heinrich von Poser, whose travelogue of the Deccan was translated by Gita Dharampal-Frick of Heidelberg University, there were two names for the city: "On 3 December 1622, we reached the city of Bagneger or Hederabat, the seat of the king Sultan Mehemet Culi Cuttub Shah and the capital of the kingdom".French traveller Jean de Thévenot visited the Deccan region in 1666–1667 refers to the city in his book Travels in India as "Bagnagar and Aiderabad".

Early and medieval history : Archaeologists excavating near the city have unearthed Iron Age sites that may date from 500 BCE.The region comprising modern Hyderabad and its surroundings was ruled by the Chalukya dynasty from 624 CE to 1075 CE. Following the dissolution of the Chalukya empire into four parts in the 11th century, Golconda came under the control of the Kakatiya dynasty from 1158, whose seat of power was at Warangal, 148 km (92 mi) northeast of modern Hyderabad.

The Kakatiya dynasty was reduced to a vassal of the Khalji dynasty in 1310 after its defeat by Sultan Alauddin Khalji of the Delhi Sultanate. This lasted until 1321, when the Kakatiya dynasty was annexed by Malik Kafur, Allaudin Khalji's general.During this period, Alauddin Khalji took the Koh-i-Noor diamond, which is said to have been mined from the Kollur Mines of Golconda, to Delhi.Muhammad bin Tughluq succeeded to the Delhi sultanate in 1325, bringing Warangal under the rule of the Tughlaq dynasty until 1347 when Ala-ud-Din Bahman Shah, a governor under bin Tughluq, rebelled against Delhi and established the Bahmani Sultanate in the Deccan Plateau, with Gulbarga, 200 km (124 mi) west of Hyderabad, as its capital. The Hyderabad area was under the control of the Musunuri Nayaks at this time, who, however, were forced to cede it to the Bahmani Sultanate in 1364. The Bahmani kings ruled the region until 1518 and were the first independent Muslim rulers of the Deccan.

Sultan Quli, a governor of Golconda, revolted against the Bahmani Sultanate and established the Qutb Shahi dynasty in 1518;he rebuilt the mud-fort of Golconda and named the city "Muhammad nagar".The fifth sultan, Muhammad Quli Qutb Shah, established Hyderabad on the banks of the Musi River in 1591,to avoid the water shortages experienced at Golconda.[18] During his rule, he had the Charminar and Mecca Masjid built in the city.On 21 September 1687, the Golconda Sultanate came under the rule of the Mughal emperor Aurangzeb after a year-long siege of the Golconda Fort.The annexed city "Hyderabad" was renamed Darul Jihad (House of War),whereas its state "Golconda" was renamed Deccan Suba (Deccan province) and the capital was moved from Golconda to Aurangabad, about 550 km (342 mi) northwest of Hyderabad.

In 1714 Farrukhsiyar, the Mughal emperor, appointed Asaf Jah I to be Viceroy of the Deccan, with the title Nizam-ul-Mulk (Administrator of the Realm).[24] In 1724, Asaf Jah I defeated Mubariz Khan to establish autonomy over the Deccan Suba, named the region Hyderabad Deccan, and started what came to be known as the Asaf Jahi dynasty. Subsequent rulers retained the title Nizam ul-Mulk and were referred to as Asaf Jahi Nizams, or Nizams of Hyderabad.[20][23] The death of Asaf Jah I in 1748 resulted in a period of political unrest as his sons, backed by opportunistic neighbouring states and colonial foreign forces, contended for the throne. The accession of Asaf Jah II, who reigned from 1762 to 1803, ended the instability. In 1768 he signed the treaty of Machilipatnam, surrendering the coastal region to the East India Company in return for a fixed annual rent.

In 1769 Hyderabad city became the formal capital of the Nizams.In response to regular threats from Hyder Ali (Dalwai of Mysore), Baji Rao I (Peshwa of the Maratha Empire), and Basalath Jung (Asaf Jah II's elder brother, who was supported by the Marquis de Bussy-Castelnau), the Nizam signed a subsidiary alliance with the East India Company in 1798, allowing the British Indian Army to occupy Bolarum (modern Secunderabad) to protect the state's capital, for which the Nizams paid an annual maintenance to the British.

Until 1874 there were no modern industries in Hyderabad. With the introduction of railways in the 1880s, four factories were built to the south and east of Hussain Sagar Lake,and during the early 20th century, Hyderabad was transformed into a modern city with the establishment of transport services, underground drainage, running water, electricity, telecommunications, universities, industries, and Begumpet Airport. The Nizams ruled their princely state from Hyderabad during the British Raj.

After India gained independence, the Nizam declared his intention to remain independent rather than become part of the Indian Union. The Hyderabad State Congress, with the support of the Indian National Congress and the Communist Party of India, began agitating against Nizam VII in 1948. On 17 September that year, the Indian Army took control of Hyderabad State after an invasion codenamed Operation Polo. With the defeat of his forces, Nizam VII capitulated to the Indian Union by signing an Instrument of Accession, which made him the Rajpramukh (Princely Governor) of the state until 31 October 1956.