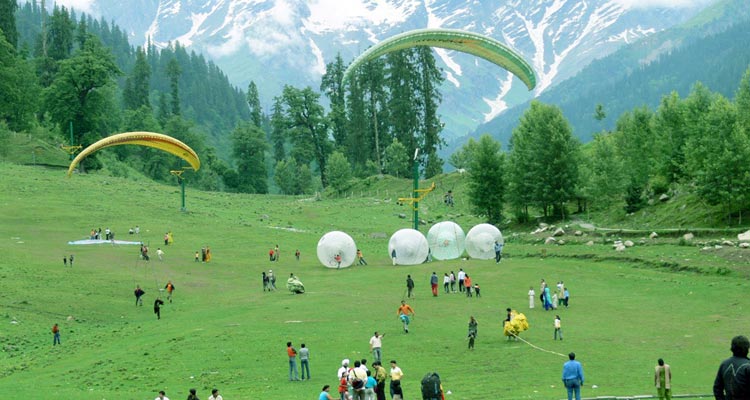 Day 1) Delhi : On arrival in Delhi Railway station or Airport you will meet and assist by our representative & transfer to your previously booked hotel after fresh up visit sightseeing places of Delhi like Raj Ghat, Jama Masjid - the largest mosque in India and the Red Fort also Qutub Minar, India Gate and the Lotus Temple. During your tour drive past the President's House, Parliament House and the Government Secretariat Buildings back to hotel, dinner at hotel, overnight stay in Delhi.

Day 2) Delhi to Shimla (365 Kms 10 Hrs) : After breakfast check out from the hotel & drive to Shimla. On the way visit Pinjore Garden, Timber Trail. On arrival check in hotel. Dinner at hotel. Overnight stay in Shimla.

Day 3) Shimla : After breakfast Excursion to Kufri. Kufri is famous for its Himalayan National Park, Poney and Yak Ride and One can see the endless Himalayan Panorama from Kufri, after lunch sightseeing of various places in and around. Shimla mosques built in (1830), Vice regal Lodge built in (1885), Christ Church built in (1844), The Gaiety Theatre- the first beauty contest of world was supposed to start (1887), The Grind lays Bank (1912)- the world wide bank started by Robert Melville Grind lay, The Scandal Point and The famous Shopping Plaza of the North The Mall. Dinner at hotel. Overnight stay in Shimla.

Day 4) Shimla to Manali (265 Kms 8 Hrs) : After breakfast checkout from the hotel & proceed to Manali. Its Placed at an altitude of 2050 m above the sea level, Manali is a very popular hill station that is flocked by tourists every year in crazy numbers. On reaching, check-in at the hotel. Get some rest.The evening is at leisure. Take a walk on main market road of Manali, Enjoy the cool breeze and more. Dinner at hotel and overnight stay in Manali.

Day 6) Manali : After breakfast visit Solang valley, it is renowned as the preferred location for adventure activities in Himachal Pradesh. For those who love the rush of adrenaline; there is no place better than Solang in Kullu Valley to indulge in parachuting, paragliding, skating and zorbing (adventure activities are at your own cost). Solang is not just about adventure activities. Its lush greenery, apple orchards, snowcapped peaks and lakes attracts lakhs of visitors, later back to hotel, dinner at hotel, overnight stay in Manali.

Day 9) Dalhousie : After breakfast Full day sightseeing to Khajjiar, 18 kms from Dalhousie. It’s one of the most scenic saucer shaped Plateau and is surrounded by dense pine and deodar forests. Its beauty has further been enhanced by a small lake in the centre with a floating island and a 9 hole golf course here are the other interesting places to cover, also visit Chamba Valley known for its 8th century Laxminarayan temple and Bhuri Singh Museum which houses a rare collection of Kangra Pintings, back to hotel, Dinner and overnight stay at the hotel.

Day 10) Dalhousie to Chandigarh (320km/10 hrs) : After breakfast check out hotel & depart for Chandigarh. Chandigarh is the 1st planned modern city of India designed by the French architect Le Corbusier. The city was named after the mother goddess of power, Chandi, whose temple Chandimandu is a feature of the new city. On arrival check in hotel. Dinner at hotel. Overnight stay in Chandigarh

Day 11) Chandigarh to Delhi (250 Kms 5 Hrs) : After breakfast checkout from the hotel and proceed to sightseeing tour of Chandigarh including Rock Garden, Rose Garden, Museum and Art Gallery, Sukhna Lake later drive to Delhi, on arrival in Delhi drop at airport or railway station.