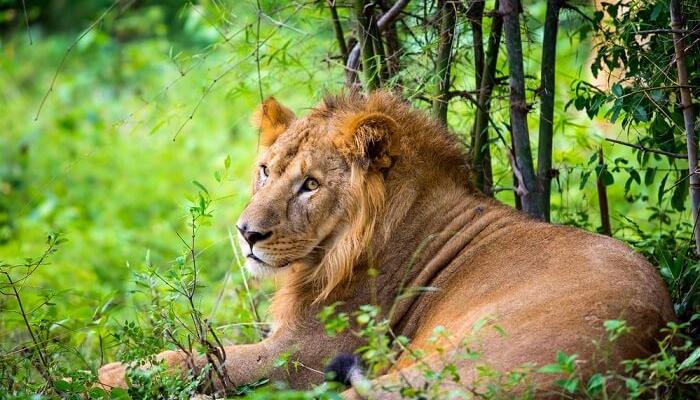 Day 1:
Reach Rajkot by 11 am and proceed to resort by road transfer. En-route Lunch. Late afternoon check-in at our resort at Gir. Evening discussion session on Gir and Wildlife photography. If possible we may take a bird watching trail along the river side. Dinner and Lights off.

Day 2 :
Today we are going engage in wildlife safari in Gir forest for about 10 hours with major focus on tracking Lions, Leopards, Eagles, Owls, Vultures and other wildlife. Today we will be doing all 3 safaris in Gir – Morning – Afternoon and Evening. Lunch and dinner at resort. Post Dinner, discussion session for about today’s sighting and photography tips.

Day 3 :
Early morning leave for 04th lion safari. Gir forest is divided into 10 different zones and we choose the zones where in chances of sighting lions are best, ensuring great photo opportunity to our travellers. After a yummy breakfast & group photo session, check out resort and leave for Rajkot station. En-route visit Devaliya zoo safari or some birding spot if possible. Reach Rajkot by 7 pm and catch the return train or flight.

Exclusions:
1. Transfer from Mumbai to Mumbai
2. Meals during the train/flight journey
3. Lens/Camera charges
4. Any personal orders, laundry, phone calls.
5. Any porter charges,tips and gratitude
6. Anything other than mentioned above
7. Difference in cost arising due to mishaps, political unrest, natural calamities or sudden changes in forest fees, permits etc.
8. Taxes as applicable.

Gir National Park is closed from 16 June to 15 October every year. The best time to visit it is between December and March. Although it is very hot in April and May, these are the best months for wildlife viewing and photography.

In the 19th century, the rulers of Indian princely states used to invite the British colonists for hunting expeditions. At the end of the 19th century, only about a dozen Asiatic lions were left in India, all of them in the Gir Forest, which was part of the Nawab of Junagarh's private hunting grounds. British viceroys brought the drastic decline of the lion population in Gir to the attention of the Nawab of Junagadh, who established the sanctuary. Today, it is the only area in Asia where Asiatic lions occur and is considered one of the most important protected areas in Asia because of its biodiversity. The Gir ecosystem with its diverse flora and fauna is protected as a result of the efforts of the government forest department, wildlife activists and NGOs. It is now considered the jewel of Gujarat's ecological resources.[