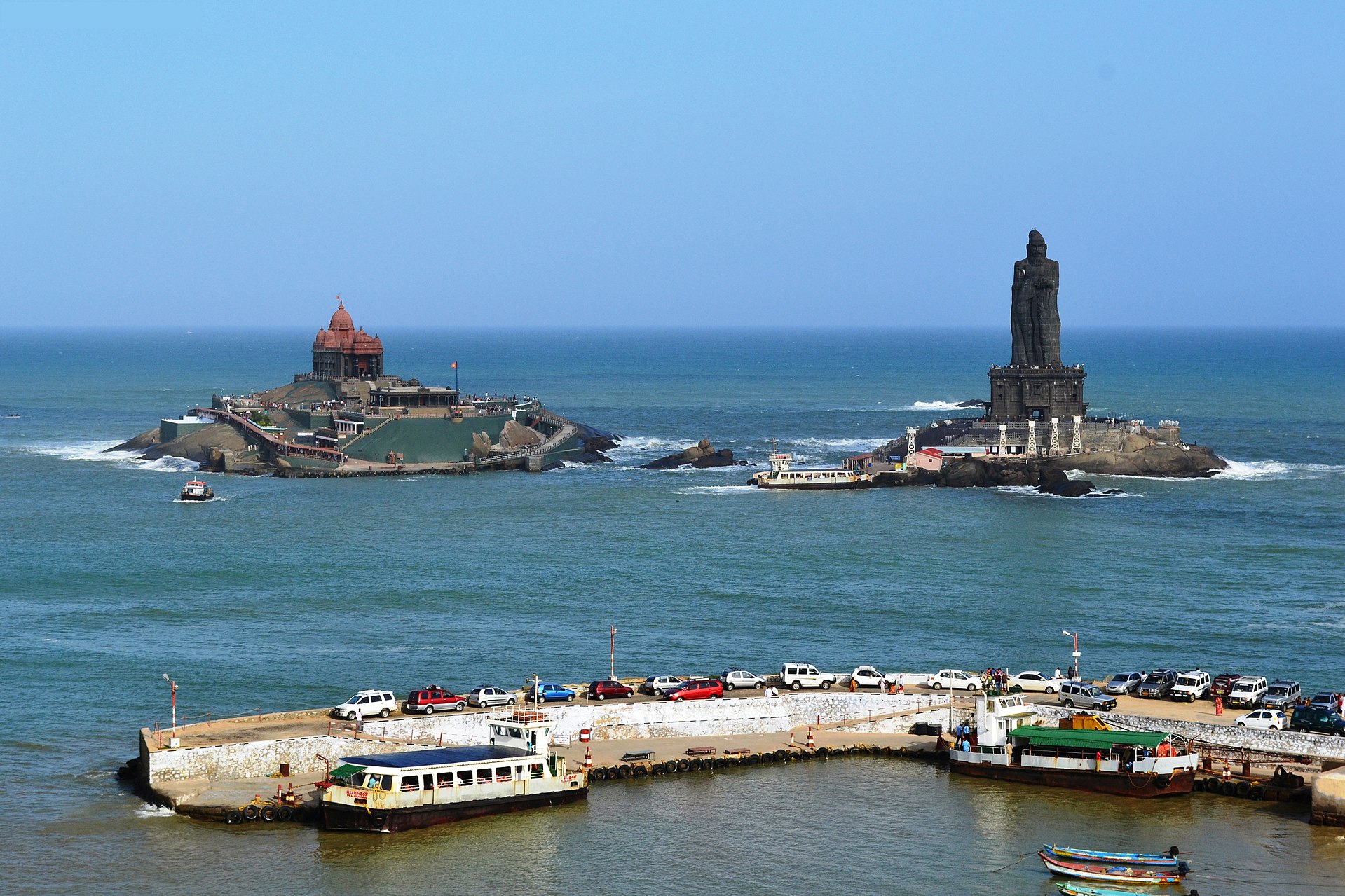 Day 5:-Early morning visit Sunrise Point at Kanyakumari. After Breakfast, Then start to Madurai. Kanyakumari to Madurai3hr 35min. If you have time visit Thiruparankundram Murugan Temple, Koodal Alagar Temple. Then drop at Madurai Airport Railway station in the night.

Madurai has been inhabited since at least the 3rd century BCE. Megasthenes may have visited Madurai during the 3rd century BCE, with the city referred as "Methora" in his accounts. The view is contested by some scholars who believe "Methora" refers to the north Indian city of Mathura, as it was a large and established city in the Mauryan Empire.[Madurai is also mentioned in Kautilya's  Arthashastra. Sangam literature like Maturaikkāñci records the importance of Madurai as a capital city of the Pandyan dynasty.[ Madurai is mentioned in the works of Roman historians Pliny the Younger Ptolemythose of the Greek geographer Strabo , and also in Periplus of the Erythraean Sea
Pandyan dynasty Map at its greatest extent
historic metal coin used for transaction
Coin of Jalaluddin Ahsan Khan, first ruler of the Sultanate of Madurai,
After the Sangam age, most of present-day Tamil Nadu, including Madurai, came under the rule of the Kalabhra dynasty, which was ousted by the Pandyas around 590 CE. The Pandyas were ousted from Madurai by the Chola dynasty during the early 9th century. The city remained under the control of the Cholas until the early 13th century, when the second Pandyan empire was established with Madurai as its capital. After the death of Kulasekara Pandian , Madurai came under the rule of the Delhi Sultanate. The Madurai Sultanate then seceded from Delhi and functioned as an independent kingdom until its gradual annexation by the Vijayanagar Empire in 1378 CE. Madurai became independent from Vijayanagar in 1559 CE under the Nayaks. Nayak rule ended in 1736 CE and Madurai was repeatedly captured several times by Chanda Sahib , Arcot Nawab and Muhammed Yusuf Khan  in the middle of 18th century
In 1801, Madurai came under the direct control of the British East India Company and was annexed to the Madras Presidency. The British government made donations to the Meenakshi temple and participated in the Hindu festivals during the early part of their rule. The city evolved as a political and industrial complex through the 19th and 20th centuries to become a district headquarters of a larger Madurai district. In 1837, the fortifications around the temple were demolished by the British. The moat was drained and the debris was used to construct new streets – Veli, Marat and Perumaal Mesthiri streets. The city was constituted as a municipality in 1866 CE. The British government faced initial hiccups during the earlier period of the establishment of municipality in land ceiling and tax collection in Madurai and Dindigul districts under the direct administration of the officers of the government. The city, along with the district, was resurveyed between 1880 and 1885 CE and subsequently, five municipalities were constituted in the two districts and six taluk boards were set up for local administration. Police stations were established in Madurai city, housing the headquarters of the District Superintendent. Under the British Madurai prospered.
Madurai, in 1921, that Mahatma Gandhi, pre-eminent leader of Indian nationalism in British-ruled India, first adopted the loin cloth as his mode of dress after seeing agricultural labourers wearing it. Leaders of the independence movement in Madurai included N.M.R. Subbaraman, Karumuttu Thiagarajan Chettiar and Mohammad Ismail Sahib The Temple Entry Authorization and Indemnity Act passed by the government of Madras Presidency under C. Rajagopalachari in 1939 removed restrictions prohibiting Shanars and Dalits from entering Hindu temples. The temple entry movement was first led in Madurai Meenakshi temple by independence activist A. Vaidyanatha Iyer in 1939.
Kanyakumari (also known as Cape Comorin) is a town in Kanyakumari District in the state of Tamil Nadu in India. The southernmost town in mainland India, it is sometimes referred to as 'the Land's End'.
A popular tourist destination in India, it is famous for its unique ocean sunrise, sunset and moonrise, the 133 feet Thiruvalluvar Statue and Vivekananda Rock Memorial off the coast, and as a pilgrimage centre.[1] Lying at the tip of peninsular India, it is the confluence of the Arabian sea, the Bay of Bengal and the Indian Ocean.[2] It has a coastal line of 71.5 km stretched on the three sides
The town is situated 20 km south of Nagercoil, the headquarters of Kanyakumari District, and about 90 km south of Thiruvananthapuram, the capital of Kerala.
On the shores of the town is a temple dedicated to Goddess Kanyakumari (the virgin Goddess), after which the town is named. Kanyakumari has been a city since the Sangam period and has been referred to in old Tamil literature and in the accounts of Marco Polo and Ptolemy.